Oil Painting is my favourite medium. I use it to capture the landscape in hopes of revealing the beauty I see. Approaching the landscape head-on: painting on location or ‘plein-air’, offers this opportunity. Plein-Air simply means to paint in the open air or outside. It allows me to express my feeling and emotion by interpreting in paint what I see around me.

Simply speaking ‘I paint where I am’, looking to find subject matter with strong impact, such as old buildings, things with a bit of character, and then working quickly to record interesting effects of light on my subject before conditions change throughout the day. Bold use of colour heightens the visual impact of each painting and loose, rapidly executed brushstrokes capture moment-by moment impressions of what is before my canvas.

The results can be fresh and spontaneous, but with enough depth to allow finding something new in the paintings each time they are viewed. 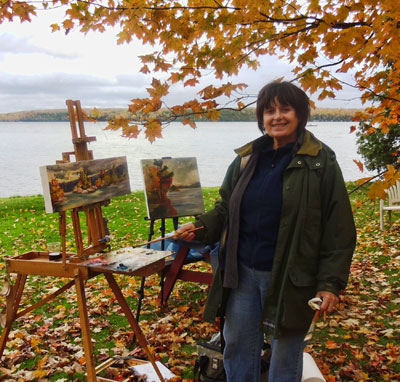 Painting ‘on location’ in all the seasons is the mainstay of my inspiration. Traveling extensively near and far from my Peterborough County home studio-gallery base, I search for my subject: the traditional landscape and rural life as well as the wilderness areas of the north. This ‘on location’ urge has also taken me across Canada, west to the Rockies and east to Newfoundland; south to the USA and Mexico; and abroad to France, Italy and Russia.

Born in Germany in 1947 to Polish-Ukrainian parents, my family emigrated to Ontario in 1950. Early interest in art led to my studies in Peterborough with John Norton at Kenner Collegiate and later with David Bierk, Eric Loder and Edwin Matthews at Sir Sandford Fleming College. This in turn led to taking the Fine Arts Administration Course at the College and Contemporary Art Theory at Trent University. To hone painting skills, many workshops were taken with various established artists that I admired such as Poul Thrane, Don Fraser, Guttorn Otto, and Ron Leonard.

Painting full time since 1990, my work is represented at several Ontario galleries and their sites can be viewed by searching my name: Lucy Manley. During the summers of 1995-96, I was selected as Artist-in-Residence at Bon Echo Provincial Park at Cloyne, Ontario. There I met the public while painting the landscapes of the Park including the famous Mazinaw Rock, which is often referred to as Canada’s Gibraltor. Since 1995 I have been teaching art classes for Continuing Education for Loyalist College at Warkworth, winter, spring and fall sessions, as well as at the College’s summer ‘plein air’ workshops at Bridgewater Retreat in Actinolite and/or Amherst Island. Teaching has also led to other venues such as at the Visual Arts Centre in Bowmanville, Gallery on the Lake in Buckhorn and by invitation to demonstrate at many art associations in Ontario. Limoux in southern France is another painting-teaching destination based at Le Monastere, that I have lead in 2005, 2007, 2009, 2011, 2013 and will be returning to in 2015.

As an active member of the East Central Ontario Art Association (ECOAA) www.ecoaa.ca since 1979, I held the position of Newsletter Editor for 25 years producing a quarterly newsletter to over 400 artist-members. Then I served as an Area Representative, Paint-out Co-ordinator and Vice-President. As of 2012 I am now President. My work has been accepted in the Association’s Annual Juried Shows where I have received many awards including Best in Show, Juror’s Choice and Honourable Mentions. I am also a member of the Art Gallery of Peterborough where my work is represented in the Art Rental Service, Art Auction and Annual Studio Tour. My work has also been accepted at the Annual Juried shows of the Visual Arts Centre in Bowmanville, Ontario, where I received the Award of Excellence and Award of Merit. As a member of the Spirit of the Hills in Northumberland, I participate in the juried shows at the annual Maple Syrup Festival and at the Campbellford Library.

Since 2004, I have enjoyed a larger studio detached from my house that is open to the public by appointment and during various Open Studio Shows. Away from home, my Jeep serves my purpose perfectly as a portable studio..